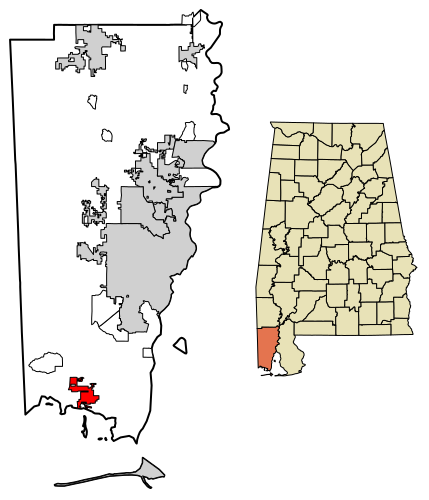 Bayou La Batre ( or locally ) is a city in Mobile County, Alabama, United States. It is included in the Mobile metropolitan statistical area. At the 2000 census, the population was 2,313. According to the 2010 U.S. Census, the city had a population of 2,558.Bayou La Batre is a fishing village with a seafood-processing harbor for fishing boats and shrimp boats. The local chamber of commerce has described the city as the "Seafood Capitol [sic] of Alabama" for packaging seafood from hundreds of fishing boats.Bayou La Batre was the first permanent settlement on the south Mobile County mainland and was founded in 1786, when French-born Joseph Bouzage (Bosarge) [1733-1795] was awarded a 1,259-acre (509 ha) Spanish land grant on the West Bank of the bayou (see history below). The modern City of Bayou La Batre was incorporated in 1955. Bayou La Batre was featured in the 1994 film Forrest Gump and the book upon which it is based. In April 2005, Disney Studios launched a secretly built pirate ship, the Black Pearl, out of Bayou La Batre for filming sequels to Pirates of the Caribbean: The Curse of the Black Pearl. Bayou La Batre's seafood industry also serves as a centerpiece for the History channel's reality documentary series Big Shrimpin'.On August 29, 2005, the area was devastated by Hurricane Katrina, which produced the largest storm surge ever recorded in the area, reaching nearly 16 ft (5 m) and pushing many shrimp boats and the cargo ship M/V Caribbean Clipper onto shore.