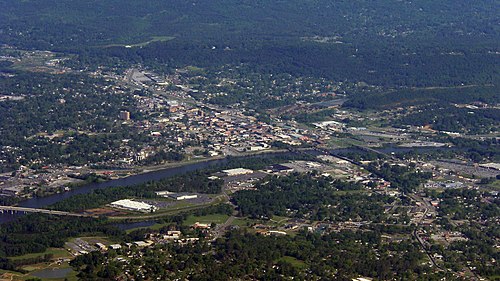 Gadsden is a city in and the county seat of Etowah County in the U.S. state of Alabama. It is located on the Coosa River about 56 miles (90 km) northeast of Birmingham and 90 miles (140 km) southwest of Chattanooga, Tennessee. It is the primary city of the Gadsden Metropolitan Statistical Area, which has a population of 103,931. As of the 2010 census, the population of the city was 36,856, with an estimated population of 35,000 in 2019. Gadsden and Rome, Georgia, are the largest cities in the triangular area defined by the interstate highways between Atlanta, Birmingham, and Chattanooga. In the 19th century, Gadsden was Alabama's second-most important center of commerce and industry, trailing only the seaport of Mobile. The two cities were important shipping centers: Gadsden for riverboats and Mobile for international trade. From the late 19th century through the 1980s, Gadsden was a center of heavy industry, including the Goodyear Tire and Rubber Company and Republic Steel. In 1991, following more than a decade of sharp decline in industry, Gadsden was awarded the honor of All-America City by the National Civic League.