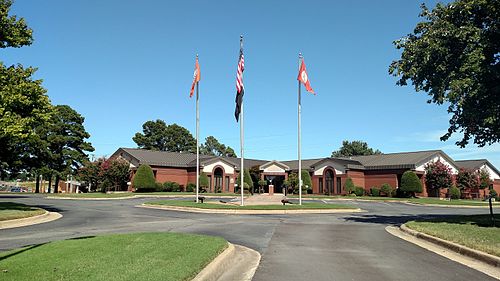 Jacksonville is a city in Pulaski County, Arkansas, United States, and a suburb of Little Rock. As of the 2010 census, the population of the city was 28,364. It is part of the Little Rock–North Little Rock–Conway Metropolitan Statistical Area with 729,135 people as of 2014. The city is named for Nicholas Jackson, a landowner who deeded the land for the railroad right-of-way to the Cairo & Fulton Railroad in 1870. The community evolved from the settlement surrounding the railroad depot, eventually incorporating in 1941. In 1941, construction began on the Arkansas Ordnance Plant (AOP), which served as the primary facility for the development of fuses and detonators for World War II. Following the war, AOP ceased operations and the land was sold for commercial interests, including the development of the Little Rock Air Force Base in 1955. Today, portions of AOP still remain, including the Arkansas Ordnance Plant Guard House, which is on the National Register of Historic Places and the Jacksonville Museum of Military History. Despite Pulaski County being an Arkansas county that is not a "dry" county, as it allows the sales of beer and liquor, the municipal limits of Jacksonville are "moist", as it does not allow the sales of alcohol in stores, but allows the sale of alcohol in some restaurants with special permits.