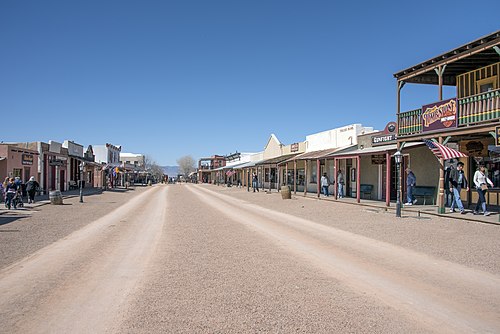 Tombstone is a historic city in Cochise County, Arizona, United States, founded in 1877 by prospector Ed Schieffelin in what was then Pima County, Arizona Territory. It became one of the last boomtowns in the American frontier. The town grew significantly into the mid-1880s as the local mines produced $40 to $85 million in silver bullion, the largest productive silver district in Arizona. Its population grew from 100 to around 14,000 in less than seven years. It is best known as the site of the Gunfight at the O.K. Corral and presently draws most of its revenue from tourism. The town was established on a mesa above the Goodenough Mine. Within two years of its founding, although far distant from any other metropolitan area, Tombstone had a bowling alley, four churches, an ice house, a school, two banks, three newspapers, and an ice cream parlor, alongside 110 saloons, 14 gambling halls, and numerous dance halls and brothels. All of these businesses were situated among and atop many silver mines. The gentlemen and ladies of Tombstone attended operas presented by visiting acting troupes at the Schieffelin Hall opera house, while the miners and cowboys saw shows at the Bird Cage Theatre and brothel. Under the surface were tensions that grew into deadly conflict. The mining capitalists and the townspeople were largely Republicans from the Northern states. Many of the ranchers (some of whom—like the Clantons—were also rustlers or other criminal varieties) were Confederate sympathizers and Democrats. The booming city was only 30 miles (48 km) from the U.S.–Mexico border and was an open market for cattle stolen from ranches in Sonora, Mexico, by a loosely organized band of outlaws known as The Cowboys. The Earp brothers—Wyatt, Virgil and Morgan—as well as Doc Holliday, arrived in December 1879 and mid-1880. The Earps had ongoing conflicts with Cowboys Ike and Billy Clanton, Frank and Tom McLaury, and Billy Claiborne. The Cowboys repeatedly threatened the Earps over many months until the conflict escalated into a shootout on October 26, 1881. The historic gunfight is often portrayed as occurring at the O.K. Corral, though it actually occurred a short distance away in an empty lot on Fremont Street. In the mid-1880s, the silver mines penetrated the water table and the mining companies made significant investments in specialized pumps. A fire in 1886 destroyed the Grand Central hoist and the pumping plant, and it was unprofitable to rebuild the costly pumps. The city nearly became a ghost town, saved only because it was the Cochise County seat until 1929. The city's population dwindled to a low of 646 in 1910, but grew to 1,380 by 2010. Tombstone has frequently been noted on lists of unusual place names.