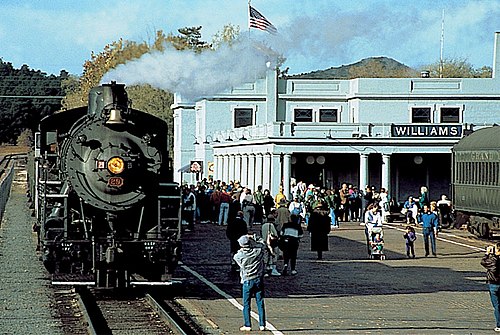 Williams (Havasupai: Wii Gvʼul) is a city in Coconino County, Arizona, west of Flagstaff. Its population was 3,023 at the 2010 census. It lies on the routes of Historic Route 66 and Interstate 40, and the Southwest Chief Amtrak train route. It is also the southern terminus of the Grand Canyon Railway, which takes visitors to Grand Canyon Village. There are numerous inns, motels, restaurants and gas stations catering to the large influx of tourists rather than local residents, especially during the summer and holiday seasons. Also known as the "Gateway to the Grand Canyon", Williams was the last city on Historic Route 66 to be bypassed by Interstate 40. The community, bypassed on October 13, 1984, continues to thrive on tourism. Boasting seven fishing lakes in the area, hiking trails up Bill Williams Mountain and into Sycamore Canyon, an alpine ski area and cross country ski trails, four-seasons weather and an abundance of wildlife, Williams offers unlimited recreational opportunities for the outdoor enthusiast. The Historic Downtown District covers six square blocks. Williams boasts a rich heritage that features the Old West and Route 66, coupled with tourism trends today and the city's heyday years of the '50s and '60s.