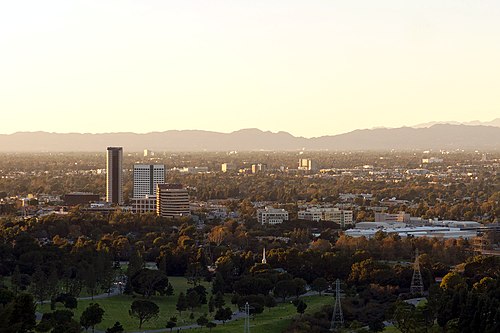 Burbank is a city in the southeastern end of the San Fernando Valley in Los Angeles County, California. Located just 12 miles (19 km) northwest of Downtown Los Angeles, Burbank is well known for being home to Walt Disney Studios and Warner Bros Studios, as well as having the largest IKEA in the United States. The population at the 2010 census was 103,340.Billed as the "Media Capital of the World" and only a few miles northeast of Hollywood, numerous media and entertainment companies are headquartered or have significant production facilities in Burbank, including Warner Bros. Entertainment, The Walt Disney Company, Nickelodeon Animation Studios, The Burbank Studios, Cartoon Network Studios with the West Coast branch of Cartoon Network, and Insomniac Games. The Hollywood Burbank Airport was the location of Lockheed's Skunk Works, which produced some of the most secret and technologically advanced airplanes, including the U-2 spy planes that uncovered the Soviet Union missile components in Cuba in October 1962. Burbank consists of two distinct areas: a downtown/foothill section, in the foothills of the Verdugo Mountains, and the flatland section. The city was referred to as "Beautiful Downtown Burbank" on Rowan & Martin's Laugh-In and The Tonight Show Starring Johnny Carson, as both shows were taped at NBC's former studios. The city was named after David Burbank, a New Hampshire–born dentist and entrepreneur who established a sheep ranch there in 1867.