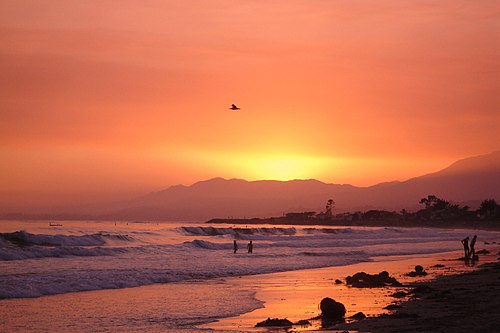 Carpinteria (; Spanish: La Carpintería) is a small oceanside city located in southeastern Santa Barbara County, California, east of Santa Barbara and northwest of Ventura. The population was 13,040 at the 2010 census. Carpinteria Beach is known for its gentle slope and calm waves in certain sandy areas but also good surfing swells in some of the more rocky areas. Seals and sea lions can be seen in the area December through May at the rookery in the nearby Carpinteria Bluffs. Tidepools contain starfish, sea anemones, crabs, snails, octopuses and sea urchins. A popular campground is located adjacent to the beach. There is bird watching at Carpinteria Salt Marsh Reserve, established in 1977 and administered by the Natural Reserve System of the University of California. The Wardholme Torrey Pine, the largest known Torrey pine tree on earth, is located in downtown Carpinteria.Since 1987, the California Avocado Festival has been held in Carpinteria on the first weekend of October. The Santa Barbara Polo Club, one of the main equestrian polo fields in the country, is located in Carpinteria. The city is also home to Hollandia Produce, an organic produce company with 70 employees. lynda.com, an online software training company ranked as one of the fastest-growing private companies in the U.S. (according to Inc. magazine's 2010 500|5000 company listing) had its headquarters in Carpinteria. The company was purchased by LinkedIn in 2015 for $1.5 billion.