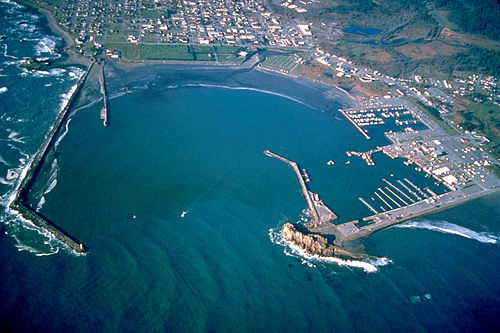 Crescent City (Chetco-Tolowa: Taa-’at-dvn, Yurok: Kohpey, Wiyot: Daluwagh ) is the county seat of, and the only incorporated city in, Del Norte County, California. Named for the crescent-shaped stretch of sandy beach south of the city, Crescent City had a total population of 7,643 in the 2010 census, up from 4,006 in the 2000 census. The population includes inmates at Pelican Bay State Prison, also within the city limits, and the former census-designated place Crescent City North annexed to the city. The city is also the site of the Redwood National Park headquarters, as well as the historic Battery Point Light. Due to the richness of the local Pacific Ocean waters and the related catch, and ease of access, Crescent City Harbor serves as home port for numerous commercial fishing vessels. The city is on the Pacific coast in the upper northwestern part of California, about 20 miles (32 km) south of the Oregon border. Crescent City's offshore geography makes it unusually susceptible to tsunamis. Much of the city was destroyed by four tsunami waves generated by the Good Friday earthquake off Anchorage, Alaska in 1964. More recently, the city's harbor suffered extensive damage and destruction from tsunamis generated by the March 11, 2011 earthquake off Sendai, Japan. Several dozen vessels and many of the docks they were moored to were destroyed as wave cycles related to the tsunamis exceeded 8 feet (2.4 m). Climate of the Crescent City is moderate, with cool summers for its latitude as a result of intense maritime moderation. Nearby inland areas behind the mountains have significantly warmer summer temperatures.