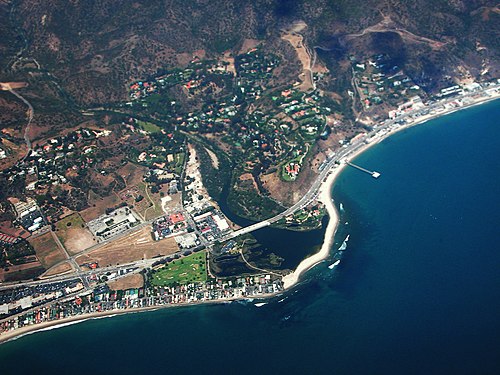 Malibu () (Spanish: Malibú) is a beach city in western Los Angeles County, California, situated about 30 miles (48 km) west of Downtown Los Angeles. It is known for its Mediterranean climate and its 21-mile (34 km) strip of the Malibu coast, incorporated in 1991 into the City of Malibu. The exclusive Malibu Colony has been historically home to Hollywood celebrities. People in the entertainment industry and other affluent residents live throughout the city, yet many residents are middle class. Most Malibu residents live from a half mile to within a few hundred yards of Pacific Coast Highway (State Route 1), which traverses the city, with some residents living up to a mile away from the beach up narrow canyons. As of the 2010 census, the city population was 12,645. Nicknamed "the 'Bu" by surfers and locals, beaches along the Malibu coast include: Topanga Beach, Big Rock Beach, Las Flores Beach, La Costa Beach, Surfrider Beach, Dan Blocker Beach, Malibu Beach, Zuma Beach, Broad Beach, Point Dume Beach, and County Line. State parks and beaches on the Malibu coast include Malibu Creek State Park, Leo Carrillo State Beach and Park, Point Mugu State Park, and Robert H. Meyer Memorial State Beach, with individual beaches: El Pescador, La Piedra and El Matador. The many parks within the Santa Monica Mountains National Recreation Area lie along the ridges above the city along with local parks that include Malibu Bluffs Park (formerly Malibu Bluffs State Park), Trancas Canyon Park, Las Flores Creek Park, and Legacy Park.Signs around the city proclaim "21 miles of scenic beauty", referring to the incorporated city limits. The city updated the signs in 2017 from the historical 27-mile (43 km) length of the Malibu coast spanning from Tuna Canyon on the southeast to Point Mugu in Ventura County on the northwest. For many residents of the unincorporated canyon areas, Malibu has the closest commercial centers and they are included in the Malibu ZIP Codes. The city is bounded by Topanga on the east, the Santa Monica Mountains (Agoura Hills, Calabasas, and Woodland Hills) to the north, the Pacific Ocean to the south, and Solromar in Ventura County to the west.