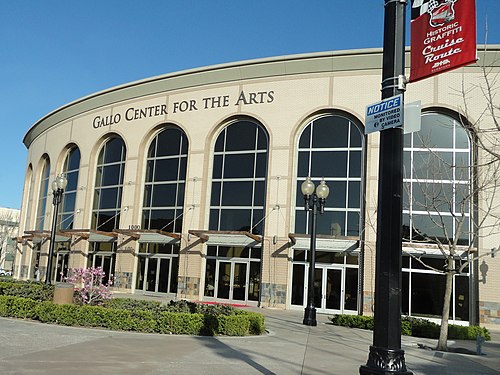 Modesto (Spanish for '"modest"'), officially the City of Modesto, is the county seat and largest city of Stanislaus County, California, United States. With a population of approximately 201,165 at the 2010 census, it is the 18th largest city in the state of California and forms part of the San Jose-San Francisco-Oakland Combined Statistical Area. Modesto is located in the Central Valley, 68 miles (109 km) south of Sacramento and 90 miles (140 km) north of Fresno. Its distance from other places include 40 miles (64 km) north of Merced, California, 92 miles (148 km) east of San Francisco, 66 miles (106 km) west of Yosemite National Park, and 24 miles (39 km) south of Stockton. Modesto has been honored as a Tree City USA numerous times.The city is surrounded by rich farmland. Stanislaus County ranks sixth among California counties in farm production, and is home to Gallo Family Winery, the largest family-owned winery in the United States. Led by milk, almonds, chickens, walnuts, and corn silage, the county grossed nearly $3.1 billion in agricultural production in 2011. The farm-to-table movement plays a central role in Modesto living as in the Central Valley. The Gallup-Healthways Well-Being Index for 2011, which interviews 1,000 participants about their jobs, finances, physical health, emotional state of mind and communities, ranked Modesto 126 out of the 190 cities surveyed. In December 2009, Forbes ranked Modesto 48th out of 100 among "Best Bang-for-the-Buck Cities". In this ranking, Modesto ranked 8th in housing affordability and travel time but also ranked 86th in job forecast growth and 99th in foreclosures.