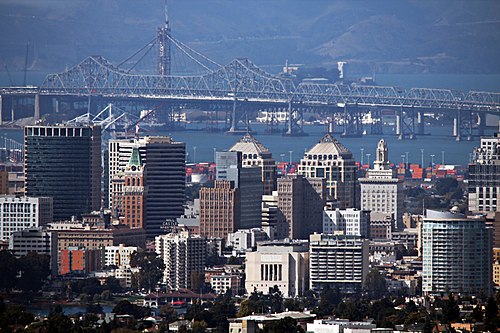 Oakland is the largest city and the county seat of Alameda County, California, United States. A major West Coast port city, Oakland is the largest city in the East Bay region of the San Francisco Bay Area, the third largest city overall in the San Francisco Bay Area, the eighth most populated city in California, and the 45th most populated city in the United States. With a population of 433,031 as of 2019, it serves as a trade center for the San Francisco Bay Area; its Port of Oakland is the busiest port in the San Francisco Bay, the entirety of Northern California, and the fifth busiest in the United States of America. An act to incorporate the city was passed on May 4, 1852, and incorporation was later approved on March 25, 1854, which officially made Oakland a city. Oakland is a charter city.Oakland's territory covers what was once a mosaic of California coastal terrace prairie, oak woodland, and north coastal scrub. Its land served as a rich resource when its hillside oak and redwood timber were logged to build San Francisco. Oakland's fertile flatland soils helped it become a prolific agricultural region. In the late 1860s, Oakland was selected as the western terminal of the Transcontinental Railroad. Following the 1906 San Francisco earthquake, many San Francisco citizens moved to Oakland, enlarging the city's population, increasing its housing stock, and improving its infrastructure. It continued to grow in the 20th century with its busy port, shipyards, and a thriving automobile manufacturing industry.