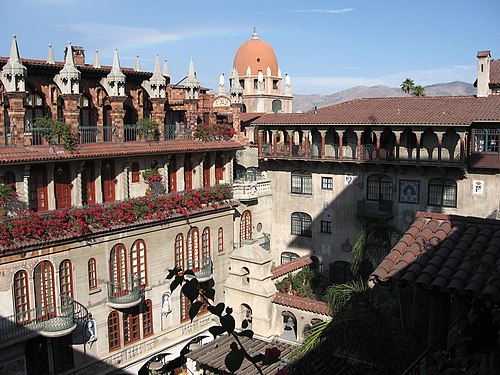 Riverside is a city in, and the county seat of, Riverside County, California, United States, located in the Inland Empire metropolitan area. It is named for its location beside the Santa Ana River. It is the most populous city in the Inland Empire and in Riverside County, and is located about 50 miles (80 km) east of downtown Los Angeles. It is also part of the Greater Los Angeles area. Riverside is the 58th most populous city in the United States and 12th most populous city in California. As of the 2010 Census, Riverside had a population of 303,871. Riverside was founded in the early 1870s. It is the birthplace of the California citrus industry and home of the Mission Inn, the largest Mission Revival Style building in the United States. It is also home to the Riverside National Cemetery. The University of California, Riverside, is located in the northeastern part of the city. The university also hosts the Riverside Sports Complex. Other attractions in Riverside include the Fox Performing Arts Center, Museum of Riverside, which houses exhibits and artifacts of local history, the California Museum of Photography, the California Citrus State Historic Park, and the Parent Washington Navel Orange Tree, the last of the two original navel orange trees in California.