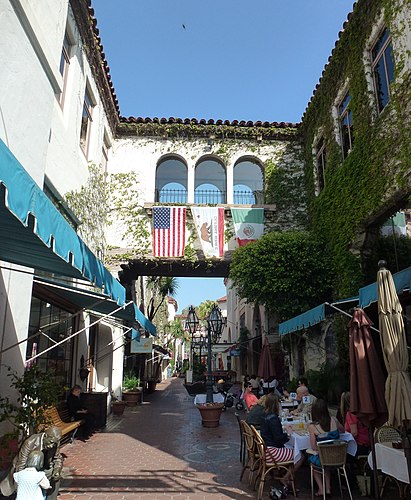 Santa Barbara (Spanish: Santa Bárbara; "Saint Barbara") is a coastal city in Santa Barbara County, California, of which it is also the county seat. Situated on a south-facing section of coastline, the longest such section on the West Coast of the United States, the city lies between the steeply rising Santa Ynez Mountains and the Pacific Ocean. Santa Barbara's climate is often described as Mediterranean, and the city has been promoted as the "American Riviera". As of 2019, the city had an estimated population of 91,364, making it the second most populous city in the county after Santa Maria. The contiguous urban area, which includes the cities of Goleta and Carpinteria, along with the unincorporated regions of Isla Vista, Montecito, Mission Canyon, Hope Ranch, Summerland, and others, has an approximate population of 220,000. The population of the entire county in 2010 was 423,895.In addition to being a popular tourist and resort destination, the city has a diverse economy that includes a large service sector, education, technology, health care, finance, agriculture, manufacturing, and local government. In 2004, the service sector accounted for 35% of local employment. Education in particular is well represented, with four institutions of higher learning on the south coast: the University of California, Santa Barbara, Santa Barbara City College, Westmont College, and Antioch University. The city is served by Santa Barbara Airport and train service is provided by Amtrak, which operates the Pacific Surfliner, which runs from San Diego to San Luis Obispo. The Santa Barbara area is connected via U.S. Highway 101 to Los Angeles 100 mi (161 km) to the southeast and San Francisco 325 mi (523 km) to the northwest. Behind the city, in and beyond the Santa Ynez Mountains, is the Los Padres National Forest, which contains several remote wilderness areas. Channel Islands National Park and Channel Islands National Marine Sanctuary are located approximately 20 miles (32 km) offshore.