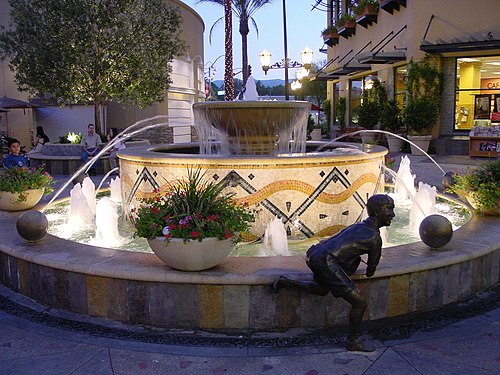 Santa Clarita () is a city in northwestern Los Angeles County, California. With an estimated 2019 population of 212,979, it is the third-largest city by population in Los Angeles County, and the 21st-largest in the state of California. It is located about 30 miles (48 km) northwest of downtown Los Angeles, and occupies 70.75 square miles (183.2 km2) of land in the Santa Clarita Valley, along the Santa Clara River. It is a notable example of a U.S. edge city, satellite city, or boomburb.Human settlement of the Santa Clarita Valley dates back to the arrival of the Chumash people, who were displaced by the Tataviam circa 450 AD. After Spanish colonists arrived in Alta California, the Rancho San Francisco was established, covering much of the Santa Clarita Valley. Henry Mayo Newhall purchased the Rancho San Francisco in 1875 and established the towns of Saugus and Newhall. The Newhall Land and Farming Company played a major role in the city's development. In December 1987, the city of Santa Clarita was incorporated, encompassing the communities of Canyon Country, Newhall, Saugus, and Valencia. The four communities retain separate identities, and residents commonly refer to one of them when asked where they are from. Santa Clarita is bounded on the west by the Golden State Freeway (I-5). The Antelope Valley Freeway (CA-14) runs northeast–southwest forming part of the city's irregular east boundary. The two freeways meet at Newhall Pass, near the city's southernmost point. The city is home to three institutions of higher education: California Institute of the Arts, an internationally renowned art university; The Master's University, a Christian liberal arts university; and College of the Canyons, a community college. Santa Clarita has a low crime rate and high-ranking schools, and is one of the state's fastest-growing cities. Six Flags Magic Mountain amusement park and Stevenson Ranch are both commonly associated with Santa Clarita. However, they are both located west of Interstate 5 and are thus outside the Santa Clarita city limits.