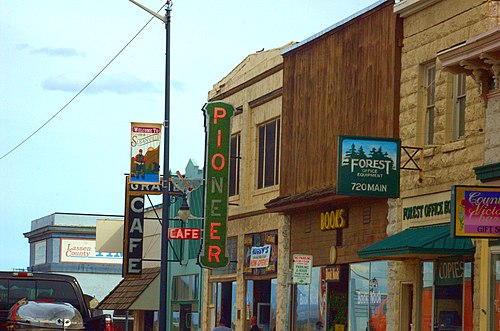 Susanville (formerly known as Rooptown) is a town in and the county seat of Lassen County, California, United States. Susanville is located on the Susan River in the southern part of the county, at an elevation of 4,186 feet (1,276 m). The population was 17,974 in the 2010 census, up from 13,541 in the 2000 census. Much of the population increase is due to new employees at two state prisons in the town. Susanville, a former logging and mining town, is the site of two state prisons: the California Correctional Center, a minimum-medium security facility, which opened in 1963; and the High Desert State Prison, California (not to be confused with High Desert State Prison, Nevada), which opened in 1995. The Federal Correctional Institution, Herlong is nearby, having opened in 2001. The prisons and their effects on the community, including the addition of local jobs, were explored in the documentary Prison Town, USA (2007), aired on PBS. Nearly half the adult population of Susanville works at the three prisons in the area, where 6,000 people are incarcerated.