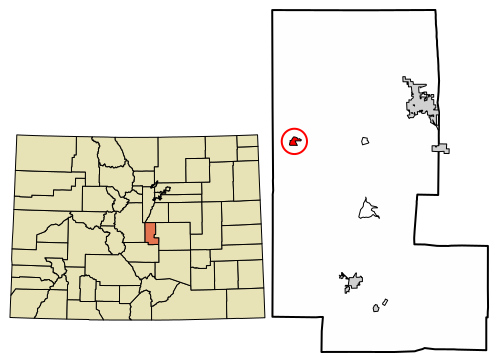 Florissant is a census-designated place and a U.S. Post Office in Teller County, Colorado, United States. The population as of the 2010 Census was 104. Florissant, Colorado, was named after Florissant, Missouri, the hometown of Judge James Castello, an early settler. The word florissant is the gerund of the French verb fleurir, which roughly means to flourish, to flower, or to blossom.Florissant Fossil Beds National Monument is located immediately south of Florissant. The Florissant Post Office has the ZIP Code 80816.Florissant is just east of the starting point of the Hayman fire, which as of 2006, is the largest fire in Colorado's history. Florissant is served by the Florissant Fire Protection District. The District consists of 2 Fire Stations, 3 Engines, 2 Tenders, 3 Rescue Trucks, and a Mule 4WD off-road vehicle. Florissant has several subdivisions, including Colorado Mountain Estates, Druid Hills, Florissant Heights, Indian Creek, Wilson Lakes, Valley Hi, and Bear Trap Ranch Florissant continues to grow. Examples of this include the addition of a new library, offering multimedia opportunities, fast broadband, computer access, and wireless access.