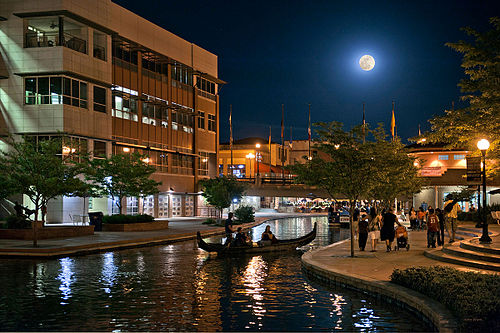 Pueblo is a home rule municipality that is the county seat and the most populous city of Pueblo County, Colorado, United States. The population was 106,595 in 2010 census, making it the 267th most populous city in the United States and the 9th largest in Colorado. Pueblo is the heart of the Pueblo Metropolitan Statistical Area, totaling over 160,000 people and an important part of the Front Range Urban Corridor. As of 2014, Pueblo is the primary city of the Pueblo–Cañon City combined statistical area (CSA) totaling approximately 208,000 people, making it the 134th largest in the nation.Pueblo is situated at the confluence of the Arkansas River and Fountain Creek, 112 miles (180 km) south of the Colorado State Capitol in Denver. The area is considered semi-arid desert land, with approximately 12 inches (304.80 mm) of precipitation annually. With its location in the "Banana Belt", Pueblo tends to get less snow than the other major cities in Colorado. Pueblo is one of the largest steel-producing cities in the United States, for which reason Pueblo is referred to as the "Steel City". The Historic Arkansas River Project (HARP) is a riverwalk in the Union Avenue Historic Commercial District, and shows the history of the devastating Pueblo Flood of 1921. Pueblo has the least expensive residential real estate of all major cities in Colorado. The median home price for homes on the market in Pueblo is $192,500 as of April 2018. It is the sixth most affordable place to live in the United States as measured by the 2014 Cost of Living Index. Costs of housing, goods and services, utilities, transportation, groceries and health care are lower than the national average. Pueblo was listed by AARP in 2013 as one of the best affordable places to live.