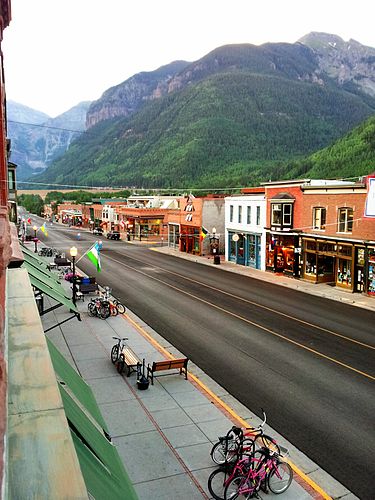 Telluride is the county seat and most populous town of San Miguel County in the southwestern portion of the U.S. state of Colorado. The town is a former silver mining camp on the San Miguel River in the western San Juan Mountains. The first gold mining claim was made in the mountains above Telluride in 1875, and early settlement of what is now Telluride followed. The town itself was founded in 1878 as "Columbia", but due to confusion with a California town of the same name, was renamed Telluride in 1887 for the gold telluride minerals found in other parts of Colorado. These telluride minerals were never found near Telluride, but the area's mines for some years provided zinc, lead, copper, silver, and other gold ores. Telluride sits in a box canyon. Steep forested mountains and cliffs surround it, with Bridal Veil Falls situated at the canyon's head. Numerous weathered ruins of old mining operations dot the hillsides. A free gondola connects the town with its companion town, Mountain Village, Colorado, at the base of the ski area. Telluride and the surrounding area have featured prominently in popular culture, and it is the subject of several popular songs. It is especially known for its ski resort and slopes during the winter, as well as an extensive festival schedule during the summer. The Telluride Historic District, which includes a significant portion of the town, is listed on the National Register of Historic Places and is also one of Colorado's 20 National Historic Landmarks. The town population was 2,325 in the 2010 United States Census.