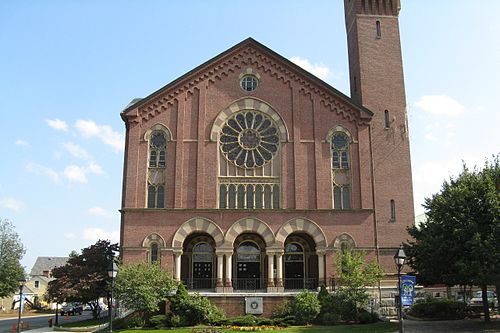 Chicopee ( CHIK-ə-pee) is a city located on the Connecticut River in Hampden County, Massachusetts, United States. As of the 2010 census, the city had a population of 55,298, making it the second-largest city in Western Massachusetts after Springfield. As of 2019, the estimated population was 55,126. Chicopee is part of the Springfield, Massachusetts Metropolitan Statistical Area. The communities of Chicopee Center (Cabotville), Chicopee Falls, Willimansett, Fairview, Aldenville, Burnett Road, Smith Highlands and Westover are located within the city. One of the ventures of the Boston Associates, Chicopee is a city built around several smaller former mill communities on its namesake, the Chicopee River. During the 19th century, the city was home to the first American producer of friction matches as well as a variety of other industries, including the Ames Manufacturing Company, an early pioneer in machining lathes, building upon the work of Springfield's Thomas Blanchard, and the largest producer of swords and cutlasses for the Union Army during the Civil War. By the start of the 20th century, the city was home to a number of industrial plants, including those of the Fisk Tire Company, one of the largest tire makers of that time, and some of the earliest sporting goods factories of A. G. Spalding.Today the city is home to a variety of specialty manufacturers, as well as Westover Air Reserve Base, the largest Air Force Reserve Base of the United States, built in 1940 with the emergence of World War II. Chicopee today goes by the nickname the "Crossroads of New England" as part of a business-development marketing campaign, one that West Springfield also uses. The name reflects the city's location among a number of metropolitan areas and its transportation network. Four interstate highways run through its boundaries, including I-90, I-91, I-291, and I-391, as well as state routes such as Route 33, 116, and 141.