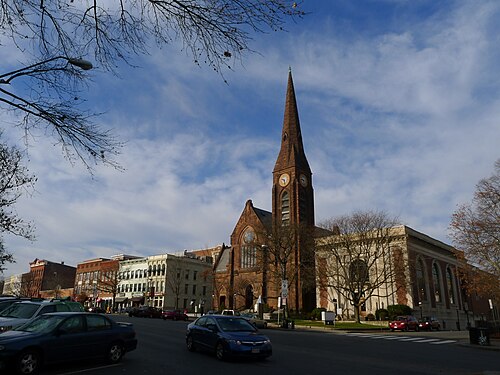 The city of Northampton is the county seat of Hampshire County, Massachusetts, United States. As of the 2010 census, the population of Northampton (including its outer villages, Florence and Leeds) was 28,549.Northampton is known as an academic, artistic, musical, and countercultural hub. It features a large politically liberal community along with numerous alternative health and intellectual organizations. Based on U.S. Census demographics, election returns, and other criteria, the website Epodunk rates Northampton as the most politically liberal medium-size city (population 25,000–99,000) in the United States. The city has a high proportion of residents who identify as gay and lesbian, a high number of same-sex households, and is a popular destination for the LGBT community.Northampton is part of the Pioneer Valley and is one of the northernmost cities in the Knowledge Corridor—a cross-state cultural and economic partnership with other Connecticut River Valley cities and towns. Northampton is part of the Springfield Metropolitan Area, one of western Massachusetts's two separate metropolitan areas. It sits approximately 19 miles (31 km) north of the city of Springfield. Northampton is home to Smith College, Northampton High School, Smith Vocational and Agricultural High School, and the Clarke Schools for Hearing and Speech.