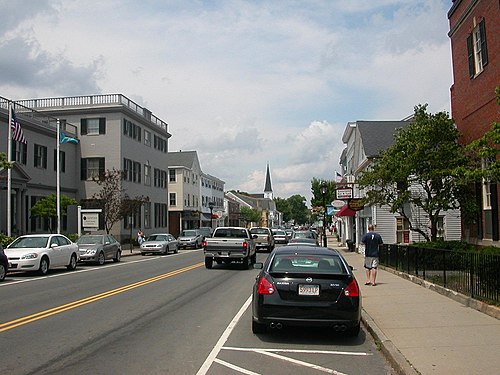 Plymouth (; historically known as Plimouth and Plimoth) is a town in Plymouth County, Massachusetts. The town holds a place of great prominence in American history, folklore, and culture, and is known as "America's Hometown." Plymouth was the site of the colony founded in 1620 by the Mayflower Pilgrims, where New England was first established. It is the oldest municipality in New England and one of the oldest in the United States. The town has served as the location of several prominent events, one of the more notable being the First Thanksgiving feast. Plymouth served as the capital of Plymouth Colony from its founding in 1620 until the colony's merger with the Massachusetts Bay Colony in 1691. It is named after Plymouth, England where the Mayflower set sail for America. Plymouth is located approximately 40 miles (64 km) south of Boston, Massachusetts in a region known as the South Shore. Throughout the 19th century, the town thrived as a center of rope making, fishing, and shipping, and was home to the Plymouth Cordage Company, formerly the world's largest rope making company. It continues to be an active port, but today its major industry is tourism. The town is served by Plymouth Municipal Airport and contains Pilgrim Hall Museum, the oldest continually operating museum in the United States. It is the largest municipality in Massachusetts by area. The population was 58,271 as of the 2010 U.S. Census. It is one of two county seats of Plymouth County, the other being Brockton.