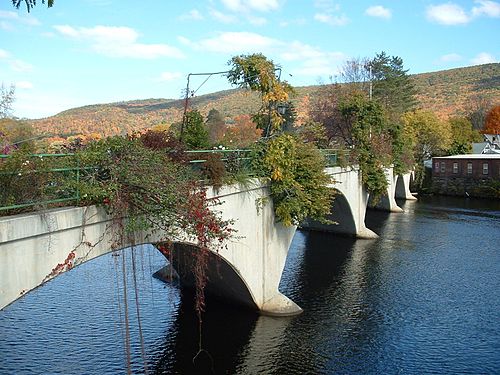 Shelburne Falls is a historic village in the towns of Shelburne and Buckland in Franklin County, Massachusetts, United States. The village is a census-designated place (CDP) with a population of 1,731 at the 2010 census. It is part of the Springfield, Massachusetts, Metropolitan Statistical Area. Notable features include the Bridge of Flowers, a former trolley bridge over the Deerfield River that is now maintained by the Shelburne Falls Women's Club as a floral display from April through October; the Shelburne Falls Trolley Museum; and the glacial potholes of the Deerfield River. Bill and Camille Cosby are well known residents of the area, though they keep a relatively low profile. The downtown is alive and well, including an independently owned pharmacy with a soda fountain, one coffee shop, a trolley museum, several restaurants, two pizza parlors, three bookstores, a newsstand, a country doctor, a grocery store, a natural foods store, many artists' galleries, and the second oldest bowling alley in the country, the Shelburne Falls Bowling Alley candlepin. A community newspaper, the West County Independent, serves Shelburne Falls and the surrounding towns. On the Shelburne side of town is the Buckland-Shelburne Elementary School, with over 200 students. On the Buckland side of town is Mohawk Trail Regional Middle School/High School with approximately 500 students.