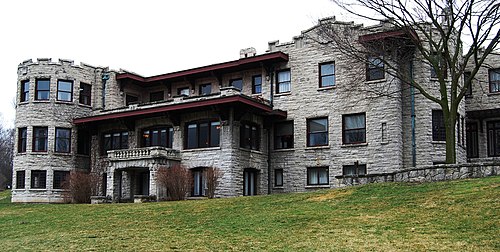 Dearborn is a city in the State of Michigan. It is located in Wayne County and is part of the Detroit metropolitan area. Dearborn is the eighth largest city in the State of Michigan. As of the 2010 census, it had a population of 98,153 and is home to the largest Muslim population in the United States per capita. First settled in the late 18th century by ethnic French farmers in a series of ribbon farms along the Rouge River and the Sauk Trail, the community grew in the 19th century with the establishment of the Detroit Arsenal on the Chicago Road linking Detroit and Chicago. In the 20th century, it developed as a major manufacturing hub for the automotive industry. Henry Ford was born on a farm here and later established an estate in Dearborn, as well as his River Rouge Complex, the largest factory of his Ford empire. He developed mass production of automobiles, and based the world headquarters of the Ford Motor Company here. The city has a campus of the University of Michigan as well as Henry Ford College. The Henry Ford, the United States' largest indoor-outdoor historic museum complex and Metro Detroit's leading tourist attraction, is located here.Dearborn residents are Americans primarily of European or Middle Eastern ancestry, many descendants of 19th and 20th-century immigrants. Because of new waves of immigration from the Middle East in the late 20th century, the largest ethnic grouping is now composed of descendants of various nationalities of that area: Muslims and Christians from Lebanon and Palestine, as well as Muslim immigrants from Syria, Iraq, and Yemen. The primary European ethnicities, as identified by respondents to the census, are German, Polish, Irish, and Italian.