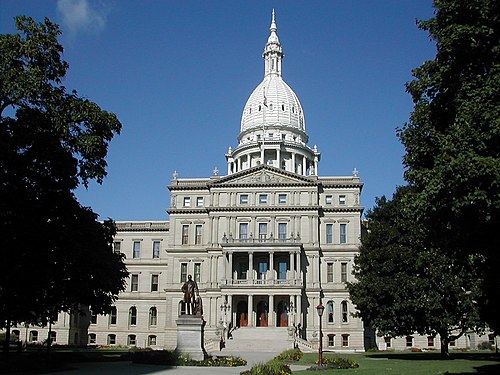 Lansing () is the capital of the U.S. state of Michigan. It is mostly in Ingham County, although portions of the city extend west into Eaton County and north into Clinton County. The 2010 Census placed the city's population at 114,297, making it the fifth largest city in Michigan. The population of its Metropolitan Statistical Area (MSA) was 464,036, while the even larger Combined Statistical Area (CSA) population, which includes Shiawassee County, was 534,684. It was named the new state capital of Michigan in 1847, ten years after Michigan became a state. The Lansing metropolitan area, colloquially referred to as "Mid-Michigan", is an important center for educational, cultural, governmental, commercial, and industrial functions. Neighboring East Lansing is home to Michigan State University, a public research university with an enrollment of more than 50,000. The area features two medical schools, one veterinary school, two nursing schools, and two law schools. It is the site of the Michigan State Capitol, the state Supreme Court, the Court of Appeals, a federal court, the Library of Michigan and Historical Center, and headquarters of four national insurance companies. Lansing is the only U.S. state capital (among the 47 located in counties) that is not also a county seat. The seat of government of Ingham County is Mason, but the county maintains some offices in Lansing.