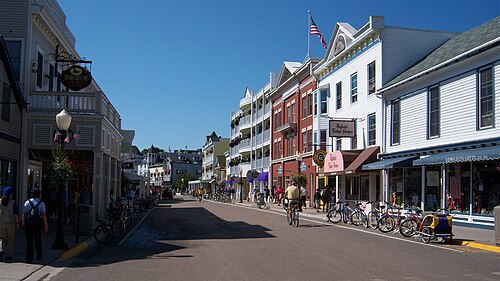 Mackinac Island ( MAK-in-aw) is a city in Mackinac County in the U.S. state of Michigan. In the 2010 census, the city had a permanent population of 492. The summer population numbers in the thousands due to an influx of summer visitors and hundreds of seasonal workers. Established as an important fur trading center in the eighteenth century, with a predominately French-speaking population of French Canadians and Métis, after the War of 1812 the city gained more Anglo-American residents. The US put restrictions on Canadians for fur trading. From 1818 until 1882 the city served as the county seat of the former Michilimackinac County, which was later organized as Mackinac County, with St. Ignace designated as the county seat. The city includes all of Mackinac Island and it also nominally includes the unpopulated Round Island. Much of the island is devoted to a state park, as well as a national forest. A unique local ordinance passed in 1898 prohibits the use of any motor vehicles on the island. Today the most common means of travel are foot, bicycle, or horseback. Certain enumerated exceptions include emergency vehicles, service vehicles, electric wheelchairs for those with disabilities, snowmobiles in winter, and golf carts for on-course use only. Mackinac Island is home to the famed Grand Hotel, built during the nineteenth century when the island was a summer destination. When the 1980 movie Somewhere in Time was filmed here, the city made an exception to allow the production company to use motorized vehicles on the island. Mackinac Island is noted for its many fudge shops, a tourist attraction. The island has a large craft industry devoted to making fudge in a traditional manner, creating portions on cold marble slabs. The many varieties are a tourist draw and frequently given as gifts throughout Michigan.