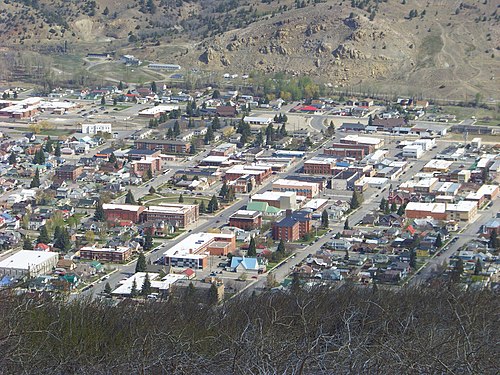 Anaconda, county seat of Deer Lodge County, which has a consolidated city-county government, is located in southwestern Montana, United States. Located at the foot of the Anaconda Range (known locally as the "Pintlers"), the Continental Divide passes within 8 mi (13 km) south of the community. As of the 2010 census the population of the consolidated city-county was 9,298, with a per capita personal income of $20,462 and a median household income of $34,716. It had earlier peaks of population in 1930 and 1980, based on the mining industry. As a consolidated city-county area, it ranks as the ninth most populous city in Montana, but as only a city is far smaller. Central Anaconda is 5,335 ft (1,626 m) above sea level, and is surrounded by the communities of Opportunity and West Valley. The county area is 741 square miles (1,920 km2), characterized by densely timbered forestlands, lakes, mountains and recreation grounds. The county has common borders with Beaverhead, Butte-Silver Bow, Granite, Jefferson and Powell counties.