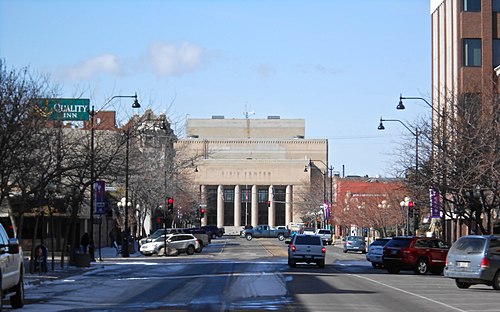 Great Falls is a city and the county seat of Cascade County, Montana, United States. The 2019 census estimate put the population at 58,434. The population was 58,505 at the 2010 census. It is the principal city of the Great Falls, Montana Metropolitan Statistical Area, which encompasses all of Cascade County and has a population of 82,278. Great Falls was the largest city in Montana from 1950 to 1970, when Billings surpassed it. Great Falls remained the second largest city in Montana until 2000, when it was passed by Missoula. Since then Great Falls has been the third largest city in the state.Great Falls takes its name from the series of five waterfalls in close proximity along the upper Missouri River basin that the Lewis and Clark Expedition had to portage around over a ten-mile stretch; the effort required 31 days of arduous labor during the westward leg of their 1805–06 exploration of the Louisiana Purchase and to the Pacific Northwest Coast of the Oregon Country. Each falls sports a hydroelectric dam today, hence Great Falls is nicknamed "the Electric City". Currently there are two undeveloped parts of their portage route; these are included within the Great Falls Portage, a National Historic Landmark. The city is home to the C. M. Russell Museum Complex, the University of Providence, Great Falls College Montana State University, Apollos University, Giant Springs, the Roe River (which is claimed to be the world's shortest river), the Montana School for the Deaf and the Blind, the Great Falls Voyagers minor league baseball team, and is adjacent to Malmstrom Air Force Base. The local newspaper is the Great Falls Tribune.