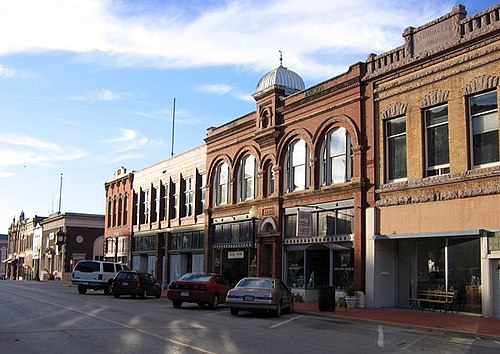 Guthrie is a city and county seat in Logan County, Oklahoma, United States, and a part of the Oklahoma City Metroplex. The population was 10,191 at the 2010 census, a 2.7 percent increase from the figure of 9,925 in the 2000 census.First known as a railroad station stop, after the Land Run of 1889, Guthrie immediately gained 10,000 new residents, who began to develop the town. It was rapidly improved and was designated as the territorial capital, and in 1907 as the first state capital of Oklahoma. In 1910, state voters chose the larger Oklahoma City as the new capital in a special election. Guthrie is nationally significant for its collection of late 19th and early 20th century commercial architecture. The Guthrie Historic District includes more than 2,000 buildings and is designated as a National Historic Landmark. Historic tourism is important to the city, and its Victorian architecture provides a backdrop for Wild West and territorial-style entertainment, carriage tours, replica trolley cars, specialty shops, and art galleries.