Mailboxes in Boring, OR 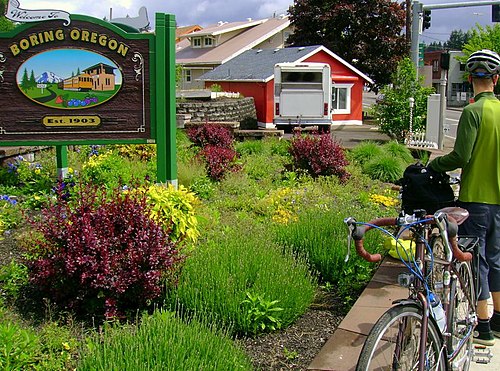 Browse mailboxes in Boring, OR

Boring is an unincorporated community in Clackamas County, Oregon, United States. It is located along Oregon Route 212 in the foothills of the Cascade mountain range, approximately twelve miles (19 km) southeast of downtown Portland, and fourteen miles (23 km) northeast of Oregon City. A bedroom community, Boring is named after William Harrison Boring, a Union soldier and pioneer whose family built a farm in the area in 1856, before Oregon had received statehood. The community was officially platted in 1903 after the Portland Railway, Light and Power Company constructed an electric rail line, which operated from Portland to Cazadero. The former railway is now part of the Springwater Corridor, a rail trail which begins in Boring and ends at the Eastbank Esplanade along the Willamette River in southeast Portland. The Boring Lava Field, an extinct volcanic field zone that comprises terrain spanning between Boring and downtown Portland, took its namesake from the community. Boring was a hub of the timber industry in the Pacific Northwest prior to and during World War I due to the abundance of surrounding temperate coniferous and evergreen forests, as well as its proximity to the Port of Portland. In addition to logging, plant nurseries and agriculture have also historically been major economic forces in Boring. Boring has often been included in lists of places with unusual names. In 2012, Boring was named a sister city of the village of Dull, Perthshire, Scotland, and later Bland, New South Wales, Australia.