Mailboxes in Oakridge, OR 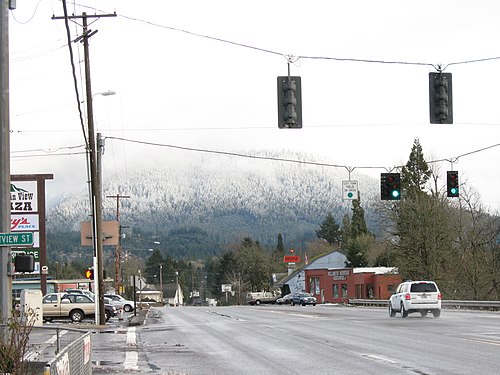 Browse mailboxes in Oakridge, OR

Oakridge is a city in Lane County, Oregon, United States. The population was 3,205 as of the 2010 census. It is located east of Westfir on Oregon Route 58, about 40 miles (64 km) east of Eugene and 150 miles (240 km) southeast of Portland. Surrounded by the Willamette National Forest and the Cascade Range, Oakridge is popular with outdoor enthusiasts for its hiking, mountain biking, wildflowers, fly fishing, birding, watersports, and the nearby Willamette Pass Resort.The city was originally a community called "Hazeldell", and its post office was established on July 26, 1888. When a station on the Southern Pacific Railroad opened in May 1912, it was named "Oak Ridge" by a railroad executive for the surrounding topography, and on July 19 of that year the name was changed to be spelled as a single word.The economy of Oakridge and nearby Westfir is centered on recreation. In the 20th century, there were two sawmills that processed logs from nearby timberland—an Oakridge mill owned by the Pope and Talbot Lumber Company and an Edward Hines mill in Westfir. Both of the mills had closed by 1985. Since then the economy has been transitioning, with a new general store opening in 2010, a bakery in 2011, and a brewery and mercantile.