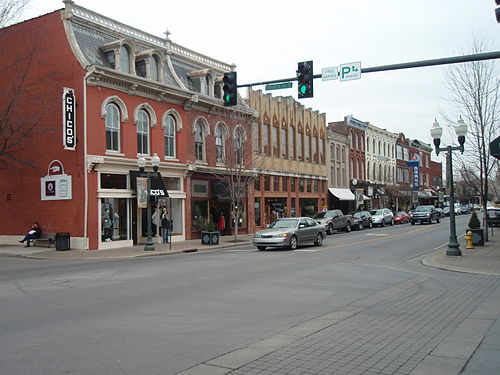 Franklin is a city in, and the county seat of, Williamson County, Tennessee, United States. About 21 miles (34 km) south of Nashville, it is one of the principal cities of the Nashville metropolitan area and Middle Tennessee. As of 2019, its estimated population was 83,097, and it is the seventh-largest city in Tennessee.The city developed on both sides of the Harpeth River, a tributary of the Cumberland River. In the 19th century, much of the area economy (especially the cultivation of tobacco and hemp) depended on enslaved labor. During the Civil War, Franklin was the site of two battles, the Battle of Franklin (1863) and the Battle of Franklin (1864). After Reconstruction, racial violence increased in this area, when whites worked to ensure dominance. As the county seat, Franklin was the site of several lynchings of African-American men in this period. Franklin was a trading and judicial center for Williamson County, which was primarily rural in land use into the late 20th century, with an economy based on traditional commodity crops and purebred livestock. Since 1980, the part of Williamson County north of Franklin has been developed for residential and related businesses, in addition to modern service industries. The population has increased rapidly, with growth stimulated by that of the Nashville metropolitan area. Despite recent growth and development, Franklin is noted for its many historic buildings and neighborhoods, which are protected by city ordinances. Williamson County currently has the highest per capita income in Tennessee.