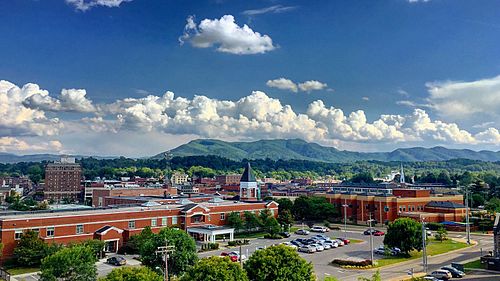 Johnson City is a city in Washington, Carter, and Sullivan counties in the U.S. state of Tennessee, with most of the city being in Washington County. As of the 2010 census, the population of Johnson City was 63,152, and by 2019 the estimated population was 66,906, making it the ninth-largest city in the state. In 2019, Johnson City was reported to have a daytime population of 202,700.Johnson City is ranked as the No. 65 "Best Small Place for Business and Careers" in the US by Forbes, and No. 5 in Kiplinger's list of "The 10 Least-Expensive Cities For Living in the U.S.A." stating the low cost of living is attributed to affordable homes and below-average utility, transportation and health-care costs.Johnson City is the principal city of the Johnson City Metropolitan Statistical Area, which covers Carter, Unicoi, and Washington counties and had a combined population of 200,966 as of 2013. The MSA is also a component of the Johnson City–Kingsport–Bristol, Tennessee–Virginia Combined Statistical Area – commonly known as the "Tri-Cities" region. This CSA is the fifth-largest in Tennessee with an estimated 500,538 people in residence.