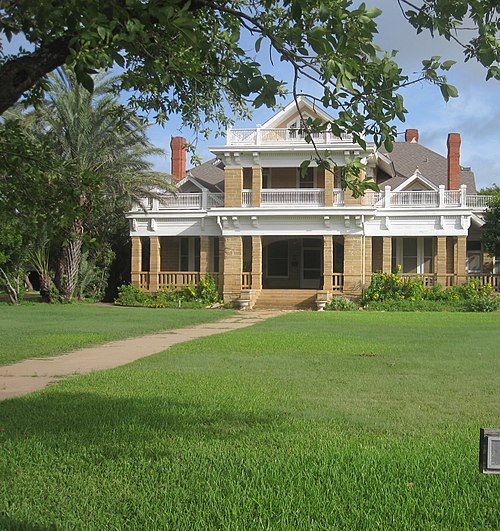 Asherton is a city in Dimmit County, Texas, United States. The population was 1,084 at the 2010 census, down from 1,342 at the 2000 census. The estimated population in 2018 was 1,064. U.S. Highway 83 runs through Asherton. Rancher Asher Richardson built the town after he purchased a huge tract of land in a special state sale. His Asherton Land and Irrigation Company developed 48,000 acres (190 km2). Richardson subsequently funded the Asherton and Gulf Railway Company. The Asher and Mary Isabelle Richardson House (1910), perched on a hill in Asherton, is easily visible from U.S. Highway 83. It is named for a combination of the first names of Richardson and his wife, Mary Isabelle, or Belle. The structure is made of sandstone and is designed in the Prairie school of architecture by the late Alfred Giles of San Antonio. The house has remained in the family for generations. The Asherton and Gulf Railroad was originally based in Carrizo Springs. From 1905 to 1909, the railroad was known as the Nueces Valley, Rio Grande and Mexico Railway Company. In 1909, 12 miles (19 km) of track opened between Artesia Wells and Light, Texas. By 1910, the last 20 miles (32 km) between Light and Asherton were completed.Telephone service arrived in 1905, and essential buildings were constructed. In 1909, Asherton obtained a post office. By 1915, the population had reached 1,000, with a bank, hotels, blacksmiths, three stores and a lumber yard. The town was incorporated in 1925. It is one of the few Texas communities which still uses the city commission government. In 1927, it became one of the largest producers of Bermuda onions in the United States. The population peaked in 1954 at 2,425.