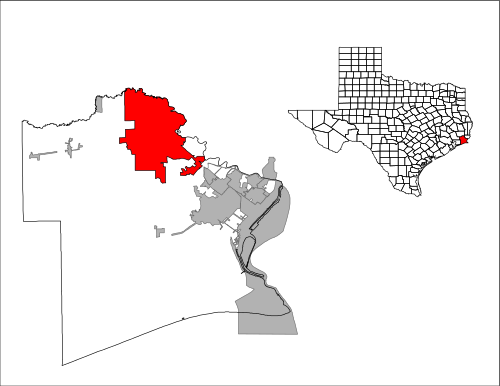 Beaumont ( BOH-mont) is a city in and the county seat of Jefferson County, Texas, in the United States, within the Beaumont–Port Arthur Metropolitan Statistical Area. Located in Southeast Texas on the Neches River about 85 miles (137 km) east of Houston (city center to city center), Beaumont had a population of 117,267 at the time of the 2010 census, making it the 30th most populous city in the state of Texas. Beaumont was founded in 1835. The pioneer settlement had an economy based on the development of lumber, farming, and port industries. In 1892, Joseph Eloi Broussard opened the first commercially successful rice mill in Texas, stimulating development of rice farming in the area; he also started an irrigation company (since 1933 established as the Lower Neches Valley Authority) to support rice culture. Rice became an important commodity crop in Texas and is now cultivated in 23 counties.A big change occurred in 1901 with the Spindletop gusher, which demonstrated that a huge oil field lay underneath and adjacent to the city. With Spindletop, several energy companies developed in Beaumont, and some remain. The area rapidly developed as one of the country's major petro-chemical refining areas. Along with Port Arthur and Orange, Beaumont forms the Golden Triangle, a major industrial area on the Texas Gulf Coast. Beaumont is home to Lamar University, a national Carnegie Doctoral Research university with 14,966 students, including undergraduates and postgraduates. Over the years, several corporations have been based in this city, including Gulf States Utilities, which had its headquarters in Beaumont until its takeover by Entergy Corporation in 1994. GSU's Edison Plaza headquarters remains the tallest building in Beaumont.