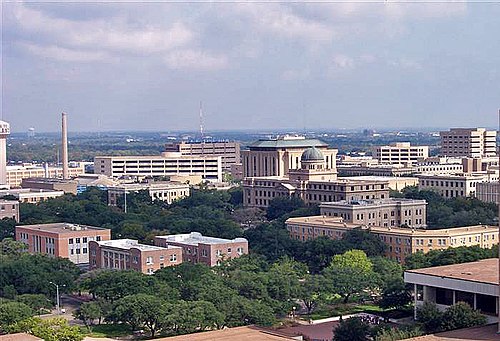 College Station is a city in Brazos County, Texas, situated in East-Central Texas in the heart of the Brazos Valley, in the center of the region known as Texas Triangle. It is 83 miles (130 kilometers) northwest of Houston and 87 miles (140 km) east northeast of Austin. As of the 2010 census, College Station had a population of 93,857, which had increased to an estimated population of 117,911 as of July 2019. College Station and Bryan together make up the Bryan-College Station metropolitan area, the 13th-largest metropolitan area in Texas with 273,101 people as of 2019. College Station is home to the main campus of Texas A&M University, the flagship institution of the Texas A&M University System. The city owes both its name and existence to the university's location along a railroad. Texas A&M's triple designation as a Land-, Sea-, and Space-Grant institution reflects the broad scope of the research endeavors it brings to the city, with ongoing projects funded by agencies such as NASA, the National Institutes of Health, the National Science Foundation, and the Office of Naval Research.