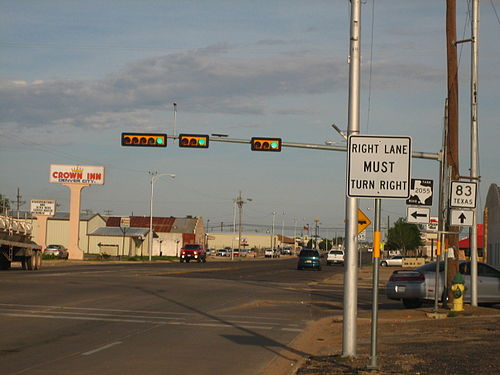 Denver City is a town located partly in Gaines County, but mostly in Yoakum County in the far western portion of the U.S. state of Texas, just a short distance from the New Mexico boundary. It is named for the petroleum company, Denver Productions. The population was 4,479 at the 2010 census. The town is located at the intersection of Texas State Highways 214 and 83. Oil and ranching remain important to Denver City. The first well was drilled by the wildcatter "Red" Davidson of Fort Worth on the ranch lands of L.P. and Ruth Bennett and her father, Dr. J. R. Smith. Oil gushed to the surface for the first time on October 10, 1935. A part of this Wasson Field, as it is known, is the site of the Yoakum County Park, donated in 1964 by Gene H. Bennett (1921–1998), the youngest son of the Bennetts.According to the Denver City Chamber of Commerce, Denver City is home to a fully functional hospital, a car dealership, a grocery store, an airport, two hotels, three churches, and six financial institutions.In 2008, the Denver City Independent School District presented a bond package for new and renovated facilities. Upgrades included a new high school, tennis courts, a junior-high band hall, an industrial arts facility, a sports complex, a maintenance center, an athletics field house, and a bus barn. Renovations included classrooms, science labs, offices and foyer, a parking lot, a main field house, and a bus barn for the junior-high campus.On May 11, 2013, voters in both Denver City and Yoakum County, as well as Crosby County, also in West Texas, all previously under local-option prohibition laws, approved the sale of liquor.