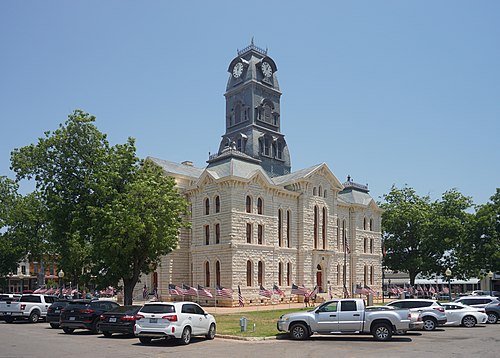 Granbury is a city and the county seat of Hood County, Texas, United States. As of the 2010 census, the city's population was 7,978, and it is the principal city of the Granbury Micropolitan Statistical Area. Granbury is located 35 miles (56 km) southwest of Fort Worth, Texas. Granbury started as a square and log cabin courthouse. Many of the buildings on the square are now registered historic landmarks, including the Granbury Opera House, which still hosts Broadway productions. The city name originated from the Confederate General Hiram B. Granberry. To explain why the city name is spelled differently, some scholars believe the name Granberry was misread on a document. Still, recent findings have concluded that Granberry chose to spell his name Granbury.A recent expansion of the city was made possible by building the Brazos River's dam in 1969, which formed Lake Granbury, a long, narrow lake that flows through the city. Granbury and Hood County are rich in Texas history. David (Davy) Crockett's wife, Elizabeth, settled in Hood County in 1853 following the Texas Revolution against Mexico. Crockett, as well as other Alamo participants, received 640 acres in land grants. The Crockett family received land in what is now Hood County. Elizabeth Crockett is buried in Acton State Historic Site, the smallest state park in Texas. A large statue of Elizabeth Crockett marks her gravesite. Several of Crockett's descendants still reside in Hood County. According to Granbury legend, John Wilkes Booth moved to Hood County and assumed the name of John St. Helen. A store on the historic town square, St. Helen's, is named after him.