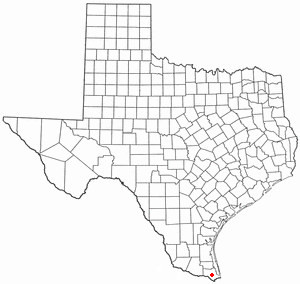 Los Fresnos is a city in Cameron County, Texas, United States. The population was 6,542 at the 2010 census, up from 4,512 at the 2000 census. It is part of the Brownsville–Harlingen–Raymondville and the Matamoros–Brownsville metropolitan areas. Located in south-central Cameron County, the city was named for the fresnos (Fraxinus berlandieriana) scattered in the woods and along streams. In 1912, Lon Hill, an early landowner, formed a company to develop a canal system that would use the Rio Grande to irrigate land for farming. Railroad construction in the early 1900s began to bring settlers to the area, and by 1915, a post office was established. Because of the fertile, irrigated land, farm products increased, and with the long growing season in the Rio Grande Valley, farming flourished. Today, the city is still surrounded by fertile farm/ranch land. Major crops are cotton, sugarcane, grains, oranges, and red grapefruit.