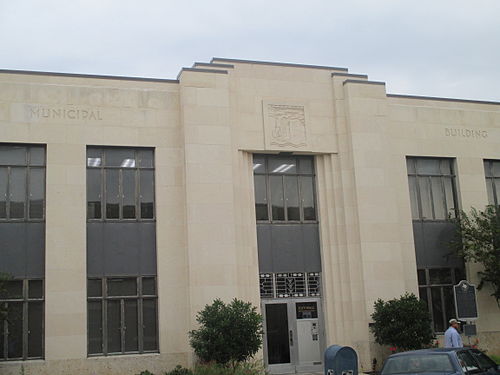 Seguin ( si-GEEN) is a city in and the county seat of Guadalupe County, Texas, United States. As of the 2010 census, its population was 25,175. By 2019, its population was estimated to be 29,992.Seguin, named in honor of Juan Seguín, a Tejano Texian freedom fighter and early supporter of the Republic of Texas, is one of the oldest towns in Texas, founded just 16 months after the Texas Revolution began. The frontier settlement was a cradle of the Texas Rangers and home to the celebrated Captain Jack Hays, perhaps the most famous Ranger of all.Seguin was the home of Dr. John E. Park, who experimented in construction using concrete made from local materials. The nearly 100 structures—the courthouse, schools, churches, homes, cisterns, walls, etc.—made up the largest concentration of early 19th-century concrete buildings in the United States. About 20 of them remain standing. The use of concrete largely ended when the railroad arrived in 1876, bringing cheap lumber and the equipment needed for brick-making. The town had five brickworks, and the wooden buildings of downtown were completely replaced with brick by the beginning of World War I. For almost 100 years, the town was dependent on the rich surrounding farmland and ranches. Then, the Texas oil boom came just as the Great Depression was taking down other towns and cities. Seguin could raise enough tax money to match the federal grants for "make-work" projects. The New Deal transformed the city's public face with Art Deco-style city hall, courthouse, jail, and fountain, as well as storm sewers, sidewalks, and three swimming pools (one for Anglos, one for Blacks, one for Hispanics). The town commemorated its centennial by opening Max Starcke Park, with a golf course, a pavilion, picnic tables, and BBQ pits along a scenic river drive, and a curving dam that created a waterfall. To preserve some of the historic character of the town, Seguin became one of the state's first Main Street cities, and the downtown district was placed on the National Register of Historic Places. Fine homes by leading architects J. Reily Gordon, Solon McAdoo, Leo M.J. Dielman, Atlee B. Ayers, and Marvin Eickenroht dating from the late 19th century and the first half of the 20th century can be found on many streets. However, the city does not have any officially designated historic residential districts. The postwar era had industrial development, including a small mill that turned scrap metal into construction products. A plant was built by Motorola in 1972 to produce car electronics. It was bought by Continental AG in 2006. A Caterpillar diesel engine assembly plant was opened in 2008.