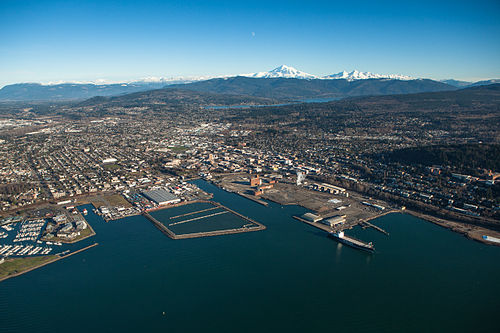 Bellingham ( BEL-ing-ham) is the most populous city in and county seat of Whatcom County in the U.S. state of Washington. It lies 21 miles (34 km) south of the U.S.–Canada border in between two major cities of the Pacific Northwest: Vancouver, British Columbia (located 52 miles (84 km) to the northwest) and Seattle (90 miles (140 km) to the south). The city had a population of 80,885 as of the 2010 census and is estimated to have grown to 92,314 as of 2019. The city of Bellingham was incorporated in 1903 through the consolidation of Bellingham, Whatcom, Fairhaven, and Sehome into the city of Bellingham. Located on Bellingham Bay, which had been named by George Vancouver in 1792, for Sir William Bellingham, the Controller of Storekeeper Accounts of the Royal Navy during the Vancouver Expedition.Today, Bellingham is the northernmost city with a population of more than 50,000 people in the contiguous United States. It is a popular tourist destination known for its easy access to outdoor recreation in the San Juan Islands and North Cascades. Bellingham is undergoing redevelopment on more than 100 acres (40 ha) of former industrial land in its Waterfront District, with a hotel, conference center, condos, retirement living, retail and commercial development planned for the site.