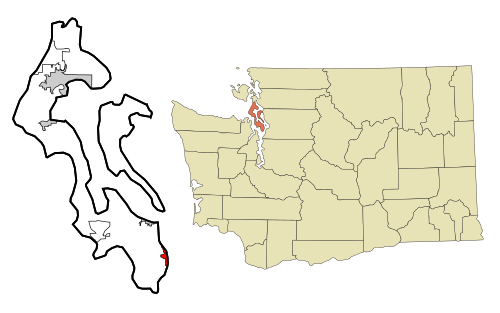 Clinton is a community and census-designated place (CDP) located on southern Whidbey Island in Island County, Washington, United States. The town was named after Clinton, Michigan. As of the 2010 census, the village was 928. However, the post office serves at least 2,500 people. Clinton is the western terminus of the Whidbey Island (Clinton)-to-Mukilteo Washington State Ferries route. It is served by State Route 525 and several major county roads. Even though the village area of Clinton is small, people as far as 7 miles (11.5 km) away consider Clinton to be their home. Much of the village is situated on a high bluff overlooking Saratoga Passage on Puget Sound. The community of Columbia Beach, however, rests at sea level. To the north of the ferry dock is old Clinton, where the community started. There are two grocery stores in Clinton, one in the downtown area and another a few miles west, at what has been named Ken's Korner. Additionally, Clinton has a Dairy Queen, the only fast food restaurant on the south end of Whidbey Island. The Sno-Isle Regional Library System recently built a library, supported by the "Friends of the Clinton Library". Based on per capita income, Clinton ranks 79th of 522 areas in the state of Washington to be ranked. It is also the highest rank achieved in Island County.