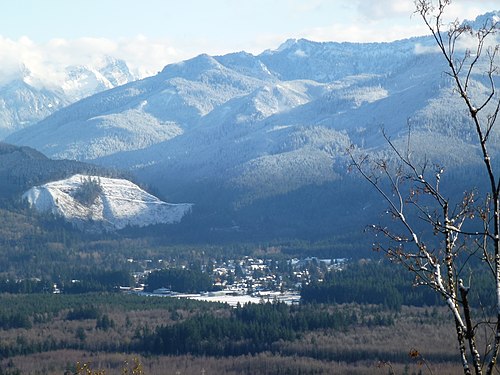 Darrington is a town in Snohomish County, Washington, United States. It is located in a North Cascades mountain valley formed by the Sauk and North Fork Stillaguamish rivers. Darrington is connected to nearby areas by State Route 530, which runs along the two rivers towards the city of Arlington, located 30 miles (48 km) to the west, and Rockport. It had a population of 1,347 at the 2010 census. Non-indigenous settlement in the area began in 1891 at the site of a Skagit campsite between the two rivers, near the traditional home of the Sauk-Suiattle tribe. Prospectors had arrived in the area during the 1880s while looking for gold and other minerals, but were quickly displaced by the logging industry that would come to dominate Darrington for much of the 20th century. The Northern Pacific Railway built a branch line to the town in 1901 and ushered in several years of growth. During the Great Depression, Darrington hosted a Civilian Conservation Corps camp that improved roads, trails, and firefighting infrastructure in the nearby Mount Baker National Forest. Several waves of Appalachian emigrants arrived in the area from North Carolina, forming a culture that is seen in the town's annual bluegrass festival and rodeo. Darrington was incorporated as a town in 1945, under a mayor–council government. Its economy has transitioned away from logging and towards tourism, particularly outdoor activities such as hiking, mountain climbing, and fishing, due to its proximity to the Mount Baker–Snoqualmie National Forest. The Darrington area is 554 feet (169 m) above sea level and receives significantly more precipitation and snowfall than the Puget Sound lowlands.