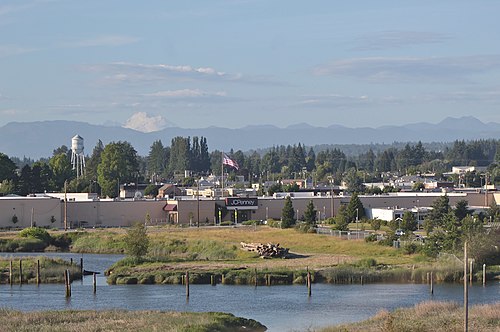 Marysville is a city in Snohomish County, Washington, United States, part of the Seattle metropolitan area. The city is located 35 miles (56 km) north of Seattle, adjacent to Everett on the north side of the Snohomish River delta. It is the second-largest city in Snohomish County after Everett, with a population of 60,020 in the 2010 U.S. census. As of 2015, Marysville is also the fastest-growing city in Washington state, growing at an annual rate of 2.5 percent. Marysville was established in 1872 as a trading post by James P. Comeford, but was not populated by other settlers until 1883. After the town was platted in 1885, a period of growth brought new buildings and industries to Marysville. In 1891, Marysville was incorporated and welcomed the completed Great Northern Railway. Historically, the area has subsisted on lumber and agrarian products; the growth of strawberry fields in Marysville led to the city being nicknamed the "Strawberry City" in the 1920s. The city experienced its first wave of suburbanization in the 1970s and 1980s, resulting in the development of new housing and commercial areas. Between 1980 and 2000, the population of Marysville increased five-fold. In the early 2000s, annexations of unincorporated areas to the north and east expanded the city to over 20 square miles (52 km2) and brought the population over 60,000. Marysville is oriented north–south along Interstate 5, bordering the Tulalip Indian Reservation to the west, and State Route 9 to the east. Mount Pilchuck, whose 5,300-foot-high (1,600 m) peak can be seen from various points in the city, appears in the city's flag and seal.