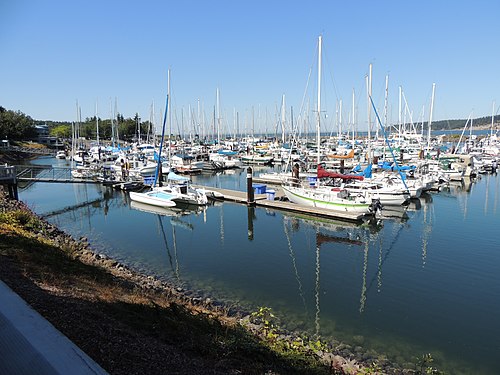 Sequim (listen) is a city in Clallam County, Washington, United States. The 2010 census counted a population of 6,606. The population served by the Sequim School District was close to 29,000 in 2018. Sequim is located along the Dungeness River near the base of the Olympic Mountains. Sequim lies within the rain shadow of the Olympic Mountains and receives on average less than 16 inches (410 mm) of rain per year – about the same as Los Angeles, California – leading it to give itself the nickname of Sunny Sequim. However, the city is relatively close to some of the wettest temperate rainforests of the contiguous United States. This climate anomaly is sometimes called the "Blue Hole of Sequim". Fogs and cool breezes from the Juan de Fuca Strait make Sequim's climate more humid than would be expected from the low average annual precipitation. Some places have surprisingly luxuriant forests dominated by Douglas-fir and western red cedar. Black cottonwood, red alder, bigleaf maple, Pacific madrone, lodgepole pine, and Garry oak can also be large. Historically, much of the area was an open oak-studded prairie supported by somewhat excessively drained gravelly sandy loam soil, though agriculture and development of the Dungeness valley have changed this ecosystem. Most soils under Sequim have been placed in a series that is named after the city. This "Sequim series" is one of the few Mollisols in western Washington and its high base saturation, a characteristic of the Mollisol order, is attributed to the minimal leaching of bases caused by low annual rainfall.The city and the surrounding area are particularly known for the commercial cultivation of lavender, supported by the unique climate. It makes Sequim the "Lavender Capital of North America", rivaled only in France. The area is also known for its Dungeness crab. Sequim is pronounced as one syllable, with the e elided: "skwim". The name developed from the Klallam language.