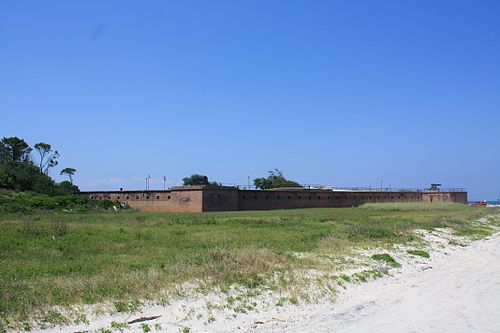 Dauphin Island is a town in Mobile County, Alabama, United States, on a barrier island of the same name (split by the Katrina Cut), in the Gulf of Mexico. It incorporated in 1988. The population was 1,238 at the 2010 census. The town is included in the Mobile metropolitan area. The island (originally named Massacre Island) was renamed for Louis XIV of France's great-grandson and heir, the dauphin, the future Louis XV of France. The name of the island is often mistaken as Dolphin Island; the word dauphin is French for dolphin, but historically, the term was used as the title of the heir apparent to the French monarch.The island is one of the Mississippi–Alabama barrier islands, with the Gulf of Mexico to the south, and the Mississippi Sound and Mobile Bay to the north. The island's eastern end helps define the mouth of Mobile Bay. The eastern, wider portion of the island is shaded by thick stands of pine trees and saw palmettos, but the narrow, western part of the island features scrub growth and few trees. Dauphin Island is home to Fort Gaines, Dauphin Island Sea Lab, The Estuarium public aquarium, the Dauphin Island Airport, boat ramps, a large public pier that sits on dry land, historic sites, several restaurants, new condominium developments, and numerous private homes. Beaches attract tourism, and fishing is a popular activity in the waters around the island. The island is connected to the mainland by the Gordon Persons Bridge. Although the island has several bird sanctuaries, the main one is the 164-acre (66 ha) Audubon Bird Sanctuary. Because Dauphin Island is the first land encountered by many birds as they migrate north from South America, many species can be found resting there before continuing their journey. In May 2012, the central public beach began charging for access. This marked the second beach on the island to charge the public following the creation of the privately owned West End Beach.