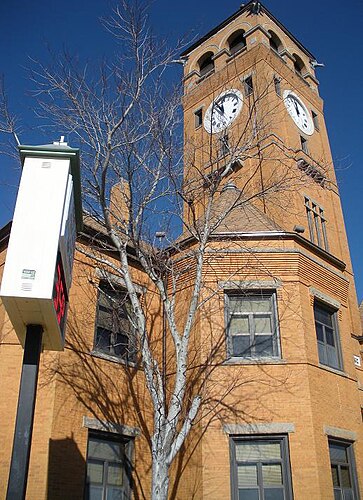 Tuskegee () is a city in Macon County, Alabama, United States. It was founded and laid out in 1833 by General Thomas Simpson Woodward, a Creek War veteran under Andrew Jackson, and made the county seat that year. It was incorporated in 1843. It is also the largest city in Macon County. At the 2010 census the population was 9,865, down from 11,846 in 2000. Tuskegee has been important in African-American history and highly influential in United States history since the 19th century. Before the American Civil War, the area was largely used as a cotton plantation, dependent on African-American slave labor. After the war, many freedmen continued to work on plantations in the rural area, which was devoted to agriculture. In 1881 the Tuskegee Normal School (now Tuskegee University, a historically black college) was founded by Lewis Adams, a former slave whose father, Jesse Adams, a slave owner, allowed him to be educated. Its first founding principal was Booker T. Washington, who developed a national reputation and philanthropic network to support education of freedmen and their children. In 1923, the Tuskegee Veterans Administration Medical Center was established, initially for the estimated 300,000 African-American veterans of World War I in the South, when public facilities were racially segregated. Twenty-seven buildings were constructed on the 464-acre campus.The city was the subject of a civil rights case, Gomillion v. Lightfoot (1960), in which the United States Supreme Court ruled that the state legislature had violated the Fifteenth Amendment in 1957 by gerrymandering city boundaries as a 28-sided figure that excluded nearly all black voters and residents, and none of the white voters or residents. The city's boundaries were restored in 1961 after the ruling.