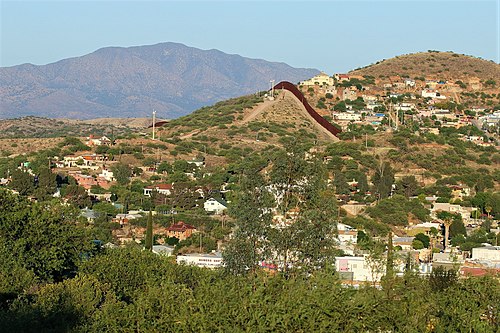 Nogales is a city in Santa Cruz County, Arizona. The population was 20,837 at the 2010 census and estimated 20,103 in 2019. Nogales forms part of the larger Tucson-Nogales combined statistical area, with a total population of 1,027,683 as of the 2010 Census. The city is the county seat of Santa Cruz County.Nogales, Arizona borders the city of Nogales, Sonora, Mexico, and is Arizona's largest international border community. The southern terminus of Interstate 19 is located in Nogales at the U.S.-Mexico border; the highway continues south into Mexico as Mexico Federal Highway 15. The highways meeting in Nogales are a major road intersection in the CANAMEX Corridor, connecting Canada, the United States, and Mexico. Nogales also is the beginning of the Arizona Sun Corridor, an economically important trade region stretching from Nogales to Prescott, including the Tucson and Phoenix metropolitan areas. Nogales is home to four international ports of entry, including the Morley Pedestrian Port of Entry, Dennis Deconcini Pedestrian and Passenger Vehicle Port of Entry, Nogales International Airport, and the Mariposa Port of Entry. The Nogales-Mariposa Port of Entry has twelve passenger vehicle inspection lanes and eight commercial inspection lanes. Due to its location on the border and its major ports of entry, Nogales funnels an estimated $30 billion worth of international trade into Arizona and the United States, per year, in fresh produce and manufactured goods from Mexico and the world through the deep sea port in Guaymas, Sonora, Mexico. This trade helps to support tens of thousands of jobs and the overall economies in Ambos Nogales and throughout the American state of Arizona and the Mexican state of Sonora.The name Nogales means "walnut trees" in Spanish, and the black walnut trees which once grew abundantly in the mountain pass between the cities of Nogales, Arizona, and Nogales, Sonora, can still be found around the town.