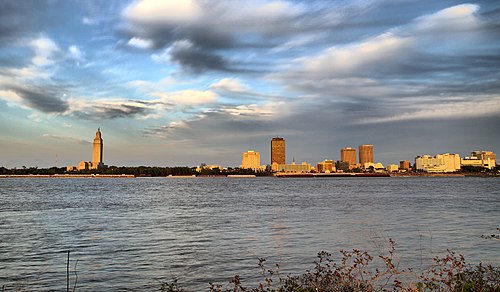 Baton Rouge ( BAT-ən ROOZH; from French Bâton-Rouge 'red stick') is the capital city of the U.S. state of Louisiana. On the eastern bank of the Mississippi River, it is the parish seat of East Baton Rouge Parish, the most-populous parish in Louisiana. Since 2019, the city of Baton Rouge has been the 100th-most-populous city in the United States, and second-largest city in Louisiana after New Orleans. It is also the 16th-most-populous state capital. As of the U.S. Census Bureau's July 2019 estimate, Baton Rouge had a population of 220,236, down from 229,493 at the 2010 U.S. census. The city of Baton Rouge is the center of the Greater Baton Rouge area, the second-largest metropolitan area in Louisiana, with a population of 834,159 as of 2017, up from 802,484 in 2010 and 829,719 in 2015.The Baton Rouge area owes its historical importance to its strategic site upon the Istrouma Bluff, the first natural bluff upriver from the Mississippi River Delta at the Gulf of Mexico. This allowed development of a business quarter safe from seasonal flooding. In addition, the city built a levee system stretching from the bluff southward to protect the riverfront and low-lying agricultural areas. The city is a culturally rich center, with settlement by immigrants from numerous European nations and African peoples brought to North America as slaves or indentured servants. It was ruled by seven different governments: French, British, and Spanish in the colonial era; the Republic of West Florida, as a United States territory and state, Confederate, and United States again since the end of the American Civil War. The city of Baton Rouge is a major industrial, petrochemical, medical, research, motion picture, and growing technology center of the American South. It is the location of Louisiana State University, the LSU System's flagship university and the largest institution of higher education in the state. It is also the location of Southern University, the flagship institution of the Southern University System, the only historically black college system in the United States. The Port of Greater Baton Rouge is the 10th-largest in the U.S. in terms of tonnage shipped, and is the farthest upstream Mississippi River port capable of handling Panamax ships. Major corporations participating in the economy of Baton Rouge and its metropolitan statistical area include Lamar Advertising Company, BBQGuys, Marucci Sports, Piccadilly Restaurants, Raising Cane's Chicken Fingers, ExxonMobil, and Dow Chemical Company.