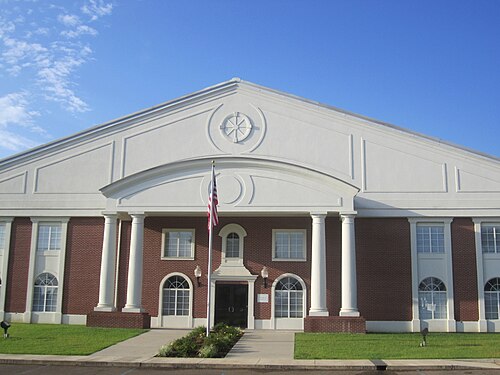 Calhoun is an unincorporated community and census-designated place in Ouachita Parish, Louisiana, United States. It is named after Archibald Calhoun, who was an original settler and landowner. Its elevation is 177 feet (54 m), and it is located at 32°30′46″N 92°21′31″W (32.5126469, -92.3584744). Calhoun is unincorporated (no local government) and is governed by the parish through a board of commissioners known as the Police Jury. It is a census designated place and at the time of the most recent United States Census Survey, the population was 1,965.Calhoun is located in a rural area with a landscape mixture of hills and woodlands on the former transcontinental route U.S. 80 near Interstate 20, approximately 10 miles west of West Monroe. It has experienced a large growth in population recently, due to many retail, restaurant, and entertainment venues nearby, as well as three local universities, but it also attracts young families raising children due to four public schools located in the community that all consistently place in the top percentile in achievement. Former U.S. Representative Newt V. Mills of Louisiana was born in Calhoun, as was the late Caddo Parish Sheriff James M. Goslin.Arkansas Republican former state chairman Ken Coon was reared in Calhoun. Zach Dasher, a candidate for Louisiana's 5th congressional district seat in the November 4 primary election, resides in Calhoun.