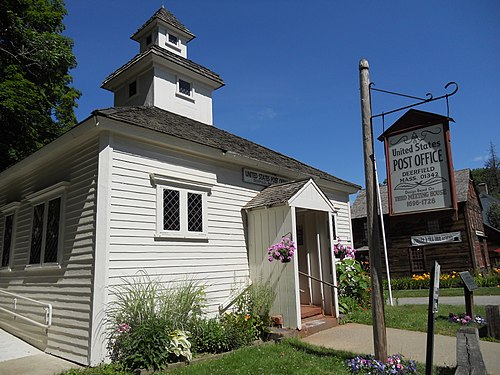 Deerfield is a town in Franklin County, Massachusetts, United States. Settled near the Connecticut River in the 17th century during the colonial era, the population was 5,125 as of the 2010 census. Deerfield is part of the Springfield, Massachusetts Metropolitan Statistical Area in western Massachusetts, lying 30 miles (48 km) north of the city of Springfield. Deerfield includes the villages of South Deerfield and Old Deerfield, which is home to two museums; Pocumtuck Valley Memorial Association and Historic Deerfield, Inc. Historic Deerfield is designated as a National Historic Landmark district, and the organization operates a museum with a focus on decorative arts, early American material culture, and history. Its eleven house museums offer interpretation of society, history, and culture from the colonial era through the late nineteenth century. The Pocumtuck Valley Memorial Association operates Memorial Hall Museum, which opened in 1880, as well as the Indian House Memorial Children's Museum and Bloody Brook Tavern. The site of early 18th century colonial battles including the Raid on Deerfield, the town is a center of heritage tourism in the Pioneer Valley. Deerfield has numerous schools, including Deerfield Academy, a private secondary preparatory school; Frontier Regional High School; Deerfield Elementary; and two separate private junior boarding schools, Bement School, which is co-ed; and Eaglebrook School, which admits only boys.